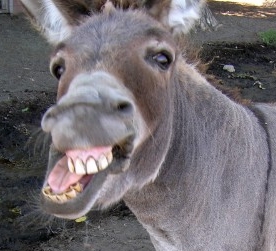 Good morning!
Text:  Numbers 22-24; Psalm 34
A talking donkey?  Really?  Yes, indeed.  The story of Balaam is fascinating, as he is an oracle of God whom the LORD won’t allow to wander off message.  Unable to curse the Israelites, Balaam makes his patron Balak angry and frustrated.  As the story develops, the Lord tells Balaam to go with the men sent by Balak to fetch him (Numbers 22:20).  When Balaam goes, the Lord is angry “because he went” (22:22).  Then the scene with the talking donkey ensues.  What’s going on here? Balaam’s heart is wrong.  He is not going to serve the Lord, but to get paid by Balak (check out 2 Peter 2:15-16).  The angel of the Lord tells him,

“Behold, I have come out to oppose you because your way is perverse before me.” (22:32)

Just because we are doing the right thing does not mean the Lord is pleased.  He wants our hearts to be right more than he wants our actions to be right.  A challenge for me this morning is this:  As I serve the Lord, just whom am I trying to please?
in Him, Mike