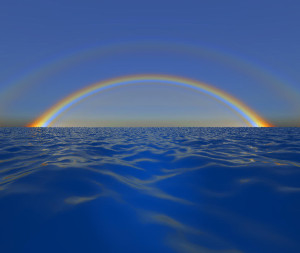 Text: Genesis 6-9; Psalm 3
The account of the great flood is remarkable.  Imagine that God would be so disgusted with human sin that He would drown the whole lot, save eight people on the ark.  God’s wrath and His anger toward sin are on display…. but so is His mercy and grace.  Consider these words:

But Noah found favor in the eyes of the Lord. …Noah was a righteous man, blameless in his generation. Noah walked with God. (Genesis 6:8-9)

The Hebrew word for “found favor” lines up with our understanding of God’s grace – unmerited favor. It is only by God’s grace – His favor and His hand upon Noah – that Noah would be called “righteous.”  It is only by God’s grace that you and I can be called righteous and have the privilege of walking with God.  Every single one of us are descendants of Noah.  We would not be here were it not for God’s having chosen Him to survive the flood.  Aren’t you grateful to God for His grace?
in Him, Mike