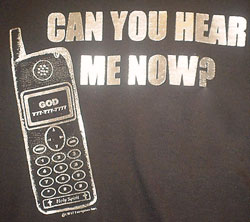 King Manasseh was a wicked king in Judah.  Even so, the Lord broke through to him:

The Lord spoke to Manasseh and to his people, but they paid no attention.  Therefore the Lord brought upon them the commanders of the army of the king of Assyria, who captured Manasseh with hooks and bound him with chains of bronze and brought him to Babylon.  And when he was in distress, he entreated the favor of the Lord his God and humbled himself greatly before the God of his fathers.  He prayed to him, and God was moved by his entreaty and heard his plea and brought him again to Jerusalem into his kingdom. Then Manasseh knew that the Lord was God. (2 Chronicles 33:10-13)

Notice how the Lord spoke first here – yet Manasseh and the people were not listening. Then big trouble comes.  That gets the king’s attention – he gets humble and he prays. The lessons here are simple.  God is speaking.  Are we listening?  Are you in trouble?  Is God trying to get your attention?  Get humble.  Turn to Him.  He is not far away.  In fact He has been in your life from the get go.
in Him, Mike