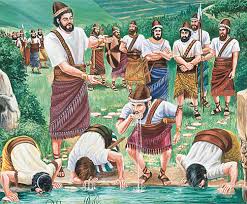 Good morning!
Text:  Judges 7-9; Psalm 70
The story of Gideon highlights again the idea that the Lord lifts up the humble, but that He opposes the proud.  Recall that back in Judges 6:11-15 we read how the Lord sends His angel to call Midian to lead the nation.  Gideon’s response is humble;  “Please, Lord, how can I save Israel? Behold, my clan is the weakest in Manasseh, and I am the least in my father’s house.”  Then, Gideon is constantly in need of encouraging reminders from the Lord that the Lord is with Him (the fleece, the trip down to listen in on the Midian camp).  It is always good to be seeking the Lord for strength and encouragement. The Lord brings great victory to the one who is fully dependent upon Him.
After Gideon’s great victories, he refuses to be made king, but then makes that ephod (a ceremonial breastplate) and it became a “snare to Gideon and to his family.” The Israelites focus on the men who would be king instead of the Lord and get oppression for their efforts.  The moral of the story?  Look how often it goes poorly for God’s leaders when they get so confident that they act on their own. The pride of men and the people’s trust in men is deadly, but humility and trust in the Lord brings strength and victory.  So, today’s challenge for me is this:  Where in my life am I confident in myself?  Where do I act out of my comfort in my own wisdom and strength instead of in humble reliance upon my God?  You see, it is not where we are weak that we are at most risk, but rather it is where we think we are strong enough to not need the Lord.
in Him,  Mike