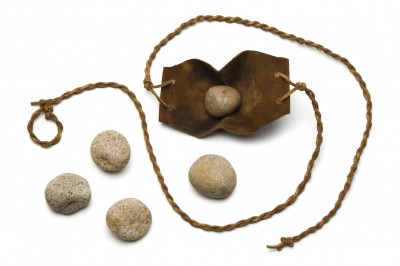 Good morning!
Text:  Romans 11;  1 Samuel 17-18
The story of David and Goliath is so very familiar.  David sees the situation not from “ground level,” but from the perspective of God’s promises.  Goliath is huge, well armed, and scary.  None of that matters, however.  When David first arrives at the scene and is told of Goliath and his threats, he asks (1 Samuel 17:26),

“For who is this uncircumcised Philistine, that he should defy the armies of the living God?”

By invoking circumcision, David is invoking God’s covenant promises to Israel.  Goliath is just a man, and he has defied the armies of God.  And God is not long ago and far away, but is “living,” present and active.
How do we respond to ground level threats?  Do we fear, fret, worry and avoid?  Just like David, we have God’s certain promises.  Our God is with us always, powerful and capable.  He still commands a great and awesome army.  It is said that if we fear the Lord, we need never fear anything else.  So… is there some attack in your life?  Some worry of danger, even real and nearby?  Unless it is from the Lord, our view should be as David’s.  How dare they?  Don’t they know with whom they mess?  We serve the living God, and anyone who messes with us will have to deal with the sharp sword of His Word, His power and His army!
in Him,  Mike