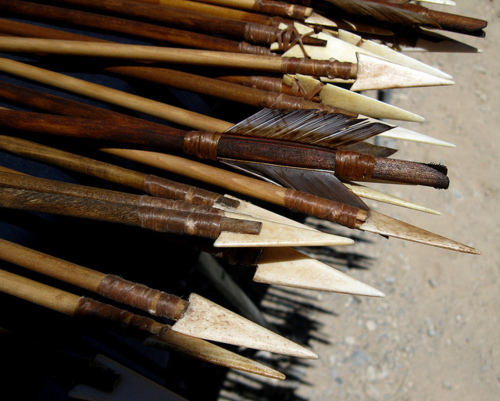 Several times in the Bible there are events where a person is told to do something and they seemingly do it “wrong.”  An example is Moses striking the rock with his staff back in Numbers 20:11.  In today’s text, we read of Elisha telling the king, Joash (or Jehoash, depending on your translation) of Israel, to shoot an arrow from then window, and declares it,

Elisha then tells the king to take and strike the arrows on the ground.  When the king strikes them three times, Elisha “was angry with him,” and said, “You should have struck five or six times; then you would have struck down Syria until you had made an end of it, but now you will strike down Syria only three times.””.

Perhaps you, like me, said “What’s up with that?” when you read it.  I am not sure how to answer that, but here goes:  It would seem that the king was lacking in zeal.  When he was being instructed by the “man of God,” Elisha, Joash responded by doing the “minimum.”  In contrast, people who serve God wholeheartedly exhibit  all-in, over-the-top abandon and excitement.  The Lord looks not only to our obedient acts, but even more, He looks into our hearts.

So, here’s the challenge:  Are there areas in my life where I have heard the Word of God instruct me with clarity to act, yet I am lazy and lackluster?  Do I ever make resolutions to make a change and then set a start date in the future… instead of right new?  Do I have real zeal to serve Him, or am I sleepy and passive?  I am sure that King Joash wished he had gone nuts with smacking those arrows on the ground – and thus been assured victory over his Syrian enemies.  May our zeal be zesty!