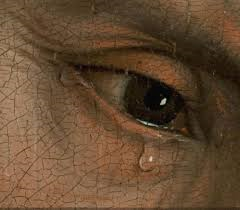 The shortest verse in the English Bible is John 11:35;

It is in the setting of the remarkable story about Jesus’ friend Lazarus dying of an illness and then being raised from the dead by Jesus.  To have raised a dead man is an astonishing display of Jesus’ power and sovereignty.  Several years ago I studied this passage carefully as I prepared to preach it.  I discovered that the answer to the question, “Why did Jesus weep?” was not as obvious as I had first thought.

Jesus had allowed Lazarus to die so that God might be glorified (11:4). When Jesus arrived on the scene, He told Martha, “I am the resurrection…” and asked her if she believed it.  She said she did.  When Jesus experienced their continued anguish, He is said to be “deeply moved in spirit and greatly troubled” (10:33).  The sense is not compassion so much as frustration.  Of course Jesus’ sorrow over their sorrow would have moved Him.  But Jesus also wept over the fact that He is the answer, that He is all they need, and at this point they are missing it.

So, here’s my own challenge:  How often do I fret, weep, worry and grieve over the matters of this life forgetting that I have Jesus, the Resurrection and the Life?  How often do I forget that Jesus, who said, “I am with you always,” (Matthew 28:20) has conquered all?  How often might I make Him weep as I ignore His wonders and His grace?