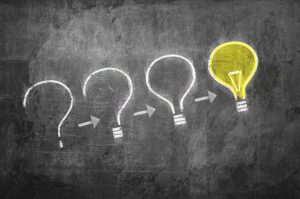 In Revelation, John the Apostle is being shown great mysteries about things unseen and things future.  At one point John is instructed to keep things to himself:

Then I saw another mighty angel coming down from heaven, wrapped in a cloud, with a rainbow over his head, and his face was like the sun, and his legs like pillars of fire.  He had a little scroll open in his hand. And he set his right foot on the sea, and his left foot on the land,  and called out with a loud voice, like a lion roaring. When he called out, the seven thunders sounded.  And when the seven thunders had sounded, I was about to write, but I heard a voice from heaven saying, “Seal up what the seven thunders have said, and do not write it down.”  And the angel whom I saw standing on the sea and on the land raised his right hand to heaven  and swore by him who lives forever and ever, who created heaven and what is in it, the earth and what is in it, and the sea and what is in it, that there would be no more delay, but that in the days of the trumpet call to be sounded by the seventh angel, the mystery of God would be fulfilled, just as he announced to his servants the prophets.  (Revelation 10:1-7)

Our God is very great.  He holds mysteries that are too much for us to understand.  There are truths that we will not be able to know until later.  While we want to be able to explain everything, we simply cannot.  This might be frustrating, especially when we are challenged by those who do not believe.  But it also is a great relief.   In God’s time He will reveal these things.  For now, it is okay to not know.  It is okay to not fully understand.  It is okay to simply trust Him.