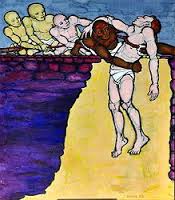 In Jeremiah 37, we read that the prophet is cast in prison, then released, and then lowered into a cistern (Chapter 38).  There was only mud in the cistern – without food or water Jeremiah was doomed.  A foreigner serving in the king’s court, Ebed-melech, had concern for Jeremiah and petitioned the king for his release from the cistern.  The king gave the order for Jeremiah’s rescue.

So Ebed-melech took the men with him and went to the house of the king, to a wardrobe in the storehouse, and took from there old rags and worn-out clothes, which he let down to Jeremiah in the cistern by ropes. Then Ebed-melech the Ethiopian said to Jeremiah, “Put the rags and clothes between your armpits and the ropes.” Jeremiah did so.  Then they drew Jeremiah up with ropes and lifted him out of the cistern. (Jeremiah 38:11-13)

It is the human condition to be trapped in the muddy cistern of sin and folly, doomed to destruction.  But a loving God full of mercy rescues us.  What a picture of the gentle rescue of our Lord.  As I thank the Lord for my own salvation, I think of the role of Ebed-melech.  I ask myself  questions:  “Do I have the compassion for the lost to petition their king?”  “Do I do what I can to make their rescue gentle?”
in Him, Mike