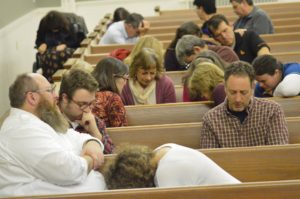 In Mark’s gospel we read an account Jesus cleansing the temple during the last week of His life on earth.  He drives out those who were buying and selling, overturning their tables and chairs.  In Mark 11:17 we read;

And he was teaching them and saying to them, “Is it not written, ‘My house shall be called a house of prayer for all the nations’? But you have made it a den of robbers.”

Scholars tell us that all the buying and selling was actually related to ongoing worship.  If you lived far away but were devout, you would come to the temple several times a year to offer sacrifices in accordance with the Law.  Rather than bring your own animals all that way, the Law indeed provided for selling the animal at home, bringing the money and then buying a suitable sacrificial animal in Jerusalem.  This was all legitimate and appropriate under the Law.  Except, it seems here that the people had perverted the practice to be about profiteering.  Not good.   This is the one place where we see Jesus’ righteous anger actually acted upon.

Jesus’ teaching is also that the mechanics and rites of worship are not the main event. He does not say that His house should be called a house of sacrifices, nor of song, nor of teaching, nor fellowship nor liturgy.  He says, “My house shall be called a house of prayer.”  Prayer is “job one.”  For the gathering of God’s people,  prayer should be the number one priority.  So – do we?  My prayer is that prayer would be the most central, defining activity of our church.